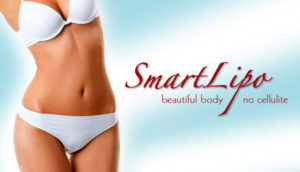 It’s almost that time of year: the summer season when beach bodies are on full display in sunny Florida. If you’re like many men and women, you exercise regularly and try to eat a reasonably healthy diet, yet you still feel frustrated by the stores of fat that simply won’t melt away. Rather than torture yourself on the treadmill until June, do yourself a favor and consider SmartLipo as your best tool to obtain the slim, contoured body you’ve always wanted.

Unlike traditional liposuction, that requires a more complicated procedure, SmartLipo combines the best of fat removal with modern technology to provide a quick, efficient, and virtually painless form of body fat reduction.

The technology used in SmartLipo is unlike anything else used in fat reduction today. Meticulously calibrated laser beams are delivered directly into targeted fat cells using fiber optic threads the size of a strand of spaghetti. This laser energy ruptures fat cells under the top layer of your skin, quickly liquefying them to be removed from the body with a suction. Since the body only has a finite amount of fat cells, the fat that is destroyed can stay away permanently, and you can finally embrace the body you have always wanted!

SmartLipo not only removes unwanted fat from the body, but it also addresses two of the largest downsides of regular liposuction. Not only does SmartLipo significantly minimize bruising, it also

introduces new collagen to the skin to generate and maintain tighter skin as the fat disappears. This is so important since skin has a tendency to sag once the fat stores underneath begin to diminish. In addition, SmartLipo provides the added benefits of minimal to no downtime and no IV or general anesthesia.

SmartLipo is so simple and provides so many incredible benefits to your body that you’ll wonder why you didn’t do it sooner! Dr. Toscano at Red Bamboo Medi Spa in Clearwater, Florida was awarded “Best SmartLipo in Tampa Bay” by DuPont Registry Magazine, so call him today at 727-726-6100 to learn more about the sculpted body in your future!